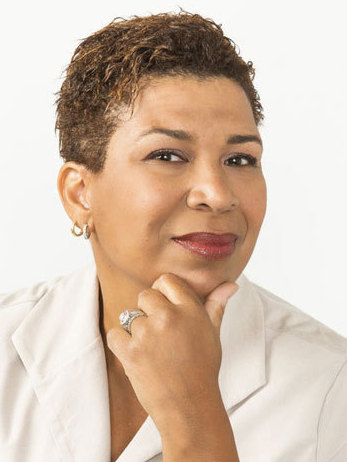 (photo on Michel Martin on front webpage by Bruce Guthrie)

Michel Martin is the weekend host of All Things Considered and host of the Consider This Saturday podcast, where she draws on her deep reporting and interviewing experience to dig in to the week's news. Outside the studio, she has also hosted "Michel Martin: Going There," an ambitious live event series in collaboration with Member Stations.

Martin came to NPR in 2006 and launched Tell Me More, a one-hour daily NPR news and talk show that aired on NPR stations nationwide from 2007-2014 and dipped into thousands of important conversations taking place in the corridors of power, but also in houses of worship, and barber shops and beauty shops, at PTA meetings, town halls, and at the kitchen table.

She has spent more than 25 years as a journalist — first in print with major newspapers and then in television. Tell Me More marked her debut as a full-time public radio show host. Martin says, "What makes public radio special is that it's got both intimacy and reach all at once. For the cost of a phone call, I can take you around the world. But I'm right there with you in your car, in your living room or kitchen or office, in your iPod. Radio itself is an incredible tool and when you combine that with the global resources of NPR plus the commitment to quality, responsibility and civility, it's an unbeatable combination."

Martin has also served as contributor and substitute host for NPR newsmagazines and talk shows, including Talk of the Nation and News & Notes.

Martin joined NPR from ABC News, where she worked since 1992. She served as correspondent for Nightline from 1996 to 2006, reporting on such subjects as the congressional budget battles, the U.S. embassy bombings in Africa, racial profiling and the aftermath of Hurricane Katrina. At ABC, she also contributed to numerous programs and specials, including the network's award-winning coverage of Sept. 11, a documentary on the Anita Hill-Clarence Thomas controversy, a critically acclaimed AIDS special and reports for the ongoing series "America in Black and White." Martin reported for the ABC newsmagazine Day One, winning an Emmy for her coverage of the international campaign to ban the use of landmines, and was a regular panelist on This Week with George Stephanopoulos. She also hosted the 13-episode series Life 360, an innovative program partnership between Oregon Public Broadcasting and Nightline incorporating documentary film, performance and personal narrative; it aired on public television stations across the country.

Before joining ABC, Martin covered state and local politics for the Washington Post and national politics and policy at the Wall Street Journal, where she was White House correspondent. She has also been a regular panelist on the PBS series Washington Week and a contributor to NOW with Bill Moyers.

Martin has been honored by numerous organizations, including the Candace Award for Communications from The National Coalition of 100 Black Women, the Joan Barone Award for Excellence in Washington-based National Affairs/Public Policy Broadcasting from the Radio and Television Correspondents' Association and a 2002 Silver Gavel Award, given by the American Bar Association. Along with her Emmy award, she received three additional Emmy nominations, including one with WNYC's Robert Krulwich, at the time an ABC contributor as well, for an ABC News program examining children's racial attitudes. In 2019, Martin was elected into the American Academy of Arts and Sciences for outstanding achievement in journalism. She is the 2021 recipient of PMJA's 2021 Leo C. Lee Award.

Transcript coming but note how she ended her speech:

"As this year's lecturer for the Herb Block Foundation's annual Herblock awards I am granted $20,000 to award to the nonprofit of my choice. In recognition of the outstanding work of Priska Neely, as well as the precarious state of local news in the region she serves, I decided to give 'my' $20,000 to the Gulf States Newsroom under the direction of Priska, headquartered at WBHM in Birmingham, Alabama, The Gulf States Newsroom is part of a project by NPR to support news coverage in underserved areas. It serves the mid-southern states – Alabama, Louisiana, Mississippi – and I hope she will use the gift to support her reporters' outstanding work and encourage them to reach even higher."