An Editorial Cartoon, also known as a political cartoon, is an illustration containing a commentary that usually relates to current events or personalities. An artist who draws such images is known as an editorial cartoonist.   - www.en.wikipedia.org 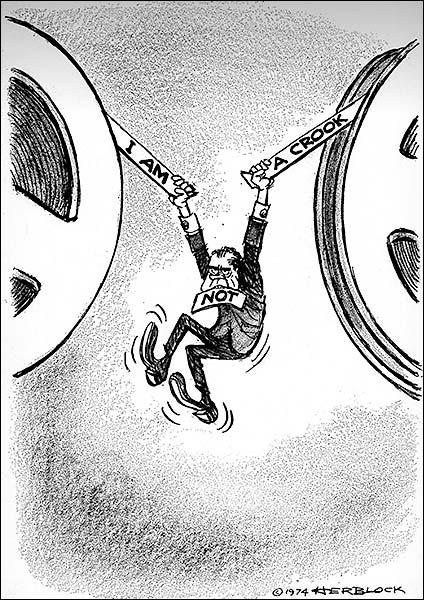 “No cartoonist or commentator in America did more to educate and inform the American public than Herblock. Political cartoons represent the freedom of expression inherent in American democracy, a powerful symbol of its strength and resilience. In the new millennium Herblock's drawings forcefully bring back the principal issues and events that shaped our world during the past century.”

—from the Preface by James H. Billington, Librarian of Congress for HERBLOCK: The Life and Work of the Great Political Cartoonist (published 2009)

“Herb Block indelibly depicted villains and rogues, corrupt officials and corporate polluters, racists and demagogues. He relentlessly attacked the gun lobby, segregationists, government secrecy, abuses of power, religious bigots, sexism, racism and, always, public hipocrisy wherever and whenever it arose. At the same time he ardently fought for civil liberties, for the poor and the oppressed. He always stood for the underdog, and for the everyman and everywoman among us trapped in, or frustrated by, the ever more complicate nature of modern life.”

—Haynes Johnson, The Age of Herblock. Excerpted from HERBLOCK: The Life and Work of the Great Political Cartoonist.

The first editorial cartoon was drawn by Benjamin Franklin, and appeared in the Pennsylvania Gazette on May 9, 1754 entitled "Join, or Die." Franklin saw the colonies as dangerously fragmented, and hoped, with the cartoon and an article, to convince colonists they would have great power if they united. Franklin used symbolism and labeling to present an opinion based on current events and politics. Cartoons throughout history have made use of similar techniques of caricature, analogy, irony, juxtaposition and exaggeration to educate and influence their audience.

Editorial cartoons provide a rich landscape for educators to teach any number of subjects (English, History, Social Studies, Art, ect..) while engaging students to use critical thinking in any number of learning styles (cooperative, inquiry-based, individualized, ect..). We provide our own lesson plans and links to others, for teachers and students to teach and learn from the art of editorial cartooning.

In the meantime, look at the Herblock Prize winners' work and other current editorial cartoonists, as well as Herblock's, to get excited about the possibilities.

The Cartoon - an essay by Herb Block