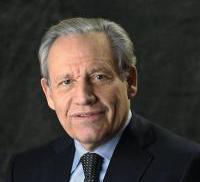 Bob Woodward has worked for The Washington Post since 1971 as a reporter, and is currently an associate editor of the Post. He and Carl Bernstein were the main reporters on the Watergate scandal for which the Post won the Pulitzer Prize in 1973. The scandal led to numerous government investigations that sent 40 people to jail and the eventual resignation of President Richard Nixon.

In his 43 years at the Post, Woodward has written many exclusive front-page stories.  He was the Post’s lead reporter on the aftermath of the September 11 terrorist attacks that won the National Affairs Pulitzer Prize in 2002.  He has authored or coauthored 16 non-fiction books which all have been national bestsellers.  Twelve of them have been #1 national non-fiction bestsellers — more than any contemporary author.  Woodward’s most recent book, The Price of Politics, was released on September 11, 2012.

In addition to the two Pulitzer Prizes, Woodward has been a recipient of nearly every other major American journalism award, including the Heywood Broun award (1972), Worth Bingham Prize for Investigative Reporting (1972 and 1986), Sigma Delta Chi Award (1973), George Polk Award (1972), William Allen White Medal (2000), and the Gerald R. Ford Prize for Reporting on the Presidency (2002).

In his memoir, former Post executive editor Ben Bradlee singled out Woodward, stating "It would be hard to overestimate the contributions to my newspaper and to my time as editor of that extraordinary reporter, Bob Woodward—surely the best of his generation at investigative reporting, the best I've ever seen.... And Woodward has maintained the same position on top of journalism's ladder ever since Watergate."

Mr. Woodward worked off of notes, so there is no formal text. Please view the video.