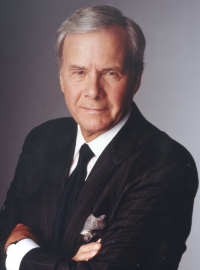 Tom Brokaw was the most widely watched television news anchor in America when he stepped down as anchor of the NBC Nightly News on December 1, 2004.

Every weekday night, more than 20 million people turned to Brokaw to get their news. Brokaw served as the sole anchor of the Nightly News for 21 years, a time of extraordinary political and economic change throughout the world.

During his television career Brokaw won nearly every major award offered by the broadcast news industry, including the Peabody Award, the Alfred I. DuPont Award, the Fred Friendly First Amendment Award and seven Emmy Awards. But Brokaw may be best remembered by millions more Americans for his 1998 book The Greatest Generation where he told the story of Americans who came of age during the Great Depression, fought WorldWar II and then went on to build America.