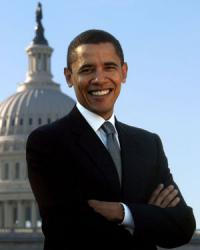 Barack Hussein Obama II (born August 4, 1961) is the 44th and current President of the United States. He is the first African American to hold the office. Obama previously served as a United States Senator from Illinois, from January 2005 until he resigned after his election to the presidency in November 2008.

A native of Honolulu, Hawaii, Obama is a graduate of Columbia University and Harvard Law School, where he was the president of the Harvard Law Review. He was a community organizer in Chicago before earning his law degree. He worked as a civil rights attorney in Chicago and taught constitutional law at the University of Chicago Law School from 1992 to 2004.

Thank you for inviting me here tonight. It's been a pretty busy week, but I figured I'd better do my best to show up here since I can't think of an easier target for political cartoonists than a tall, skinny guy with big ears and a funny name.

I want to start by congratulating Frank Swoboda and the other members of the Herblock foundation for doing such great charitable work in so little time. Every day he touched his pen to paper, Herblock made a difference in this world, and I'm sure he's looking down with pride knowing that every day you walk into the foundation, you're doing the same.

When I was preparing for this speech, I thought a lot about Herblock's philosophy on life that he would mention from time to time. As a cartoonist, Herb was always able to illustrate deeply-held convictions about complicated political issues with a few brief strokes. And so it was with this simple, graceful, yet profoundly challenging philosophy that was passed down to him from his parents:

"Be a good citizen, and think about the other guy."

Looking back on our history, at times this has been a lot harder than it sounds. But thanks to people like Herblock, we've still done a pretty good job trying. And when we've succeeded, it's made America the place where dreams are possible, where freedoms of speech and press and worship are protected, and where the rising tide lifts the boats of the many instead of just the few.

That's the America we love - the America we hope for - but that's not the America we can have by leaving this country on autopilot and going about our own business. That America takes work. It takes a belief that we're all connected as one people - that we rise and fall as one nation. It takes looking at the 45 million Americans without health insurance, the 1 in 5 children born into poverty every day, and the hundreds of thousands of veterans who don't get the care they need when they come home and saying their problems are our problems - all of us - and we have a responsibility to do something about them. And sometimes it just takes a man with a pen who's got the courage to draw those problems for the rest of us to see.

Be a good citizen. Think about the other guy.

You know, last week I was in Illinois visiting college campuses all over the state. I met some great students - good citizens themselves who want to work hard for their future and their country. But I also heard these students tell some stories that should give us all pause. I heard them talk about how they were working 25, 35 hours a week on top of going to classes to help pay for their tuition. A lot of them aren't looking forward to graduation day with excitement, but with anxiety, because that'll be the first day of debt payments that could last a lifetime. And there are even some of them who'll get their tuition bill in the mail, open it, and make the heart-wrenching decision to not come back next semester.

220,000 young Americans gave up on their dream to go to college last year for the simple reason that they could not afford the price of tuition, which is now rising at the rate of almost 10% a year. Over the last twenty-five years, it's gone up an astounding 519%. Add to that the rising cost of health care, child care, and a falling family income, and you can begin to get a picture of what these kids are facing.

The chance to go to college - the chance to unlock so many doors of opportunity and possibility - has always been a foundation of the American Dream. It's a chance once provided to my grandfather and so many other returning World War II soldiers by the GI Bill of Rights, which led to the creation of the largest middle-class in history. It's a chance that once made a young African's dreams come true when the University of Hawaii gave my father a scholarship to study in America. And it's a chance given to me by my parents, who weren't rich but believed that in a generous America, you don't have to be rich to achieve your potential - that it can be realized through hard work and education.

Today, at the beginning of 21st century, we know that the high-wage, high-value jobs of tomorrow place a higher premium on a college education than ever before. More and more, Americans are competing for these jobs with highly educated workers from India, China, and all over the world. If we want America to win in this new global economy, we have to start sending more kids to college, not less.

And so, as I stood in those Illinois colleges listening to students tell me about their problems, I started thinking, when did the cost of college stop becoming our problem? When did the headlines about skyrocketing tuition start getting crowded out by Michael Jackson and Martha Stewart, and when did this national priority start playing second fiddle to the latest partisan food fight in Washington?

I'm not sure, but I do know that I've met enough good citizens who think about the other guy and want to change this. And I believe there are enough members of both parties who want to start this country down the path of making college affordable and accessible for every American.

I look around this room tonight and feel both fortunate and hopeful that I'm in the company of folks who are already doing their part to get us there. When you announce the winners of the first Herblock scholarships this year, you're not only fulfilling Herblock's wishes, but the dreams of kids who just want the chance to succeed.

I believe it's time for Congress to follow your lead. This week, I'm introducing the Higher Education Opportunity through Pell Grant Expansion Act - the HOPE Act. This bill will make college more affordable for 430,000 Americans by increasing Pell Grant awards. Today, 5.3 million undergraduate students use these grants to fund their education. But the awards just haven't kept up with the rising price of tuition or even inflation. As a result, the current $4,050 Pell Grant maximum is $700 less in real terms than the maximum grant 30 years ago. Pell Grants now cover only 23% of the total cost of the average four-year public college.

The HOPE Act would correct this problem by raising the Pell Grant maximum to $5,100, and it would continue to raise this maximum in future years to keep up with inflation. The bill would also make sure that no student sees a reduction in Pell Grant assistance due to recent changes in the eligibility formula.

I know that some of you might be thinking that it's impossible to get anything done in Washington these days, but I think we can get bipartisan support to pass this bill. Because working families are already burdened with too many taxes, this bill is paid for without adding to the deficit or raising a dime of taxes. Instead, it will close two loopholes that guarantee banks and private lenders an additional $2 billion in taxpayer subsidies a year on top of the interest that college students and their families pay. Now, I don't blame the banks for wanting to make an extra $2 billion in profits every year, but it's our job as a society to tell them that sending our kids to college is a higher priority.

In a country filled with so much wealth and opportunity, it's hard to imagine that there are hundreds of thousands of parents every year who are forced to turn to kids who've worked hard and studied hard all through school and tell them "No, we can't send you to college."

But it's harder to imagine that any of us could rest until those parents can start saying "yes we can" to their kids.

But to do this, we need to show the same courage to challenge the public debate that Herblock showed. I haven't been in Washington very long, but sometimes part of the problem is that very important issues become reduced to simple partisan talking points and silly exaggerations. These get reported back and forth in the mainstream media in a he-said/she-said fashion, and pretty soon we get a "conventional wisdom" that ends up being much more conventional than it is wise.

But what I love about political cartoonists - at least, what I'll love about them until I open up the paper and see a drawing of my big ears accompanied by something that came out of my big mouth - is that they cut through the conventional wisdom and just tell it like it is. People like Herblock and Tony Auth and others can jolt us awake from our political cynicism with a few ingenious images and a clever phrase that can often speak more truth than a thousand words. And this is the kind of wake-up call our politics needs today more than ever.

You know, the other day I was looking through some of the cartoons in the Library of Congress' online Herblock collection, and I came across one that was given to Herblock by fellow cartoonist Joel Pett a few years ago.

The cartoon shows a man and a woman looking at a gallery filled with Herblock cartoons. And as the man stops in front of one particular cartoon, he turns to the woman and says, "This guy isn't recording history.this guy is making history."

This was not only Herblock's life, but his lesson to all of us. Be a good citizen, think about the other guy, but most importantly, do something about it. Whether it's through cartoons or campaigns, by taking it to the streets or taking it to your editor, tackling the biggest issues or lending a simple hand to your neighbor, these are the ways we leave our mark on the land we love - the same way Herblock left his mark on the pages of the Washington Post every week. And that's a legacy we can all aspire to. Thank you.