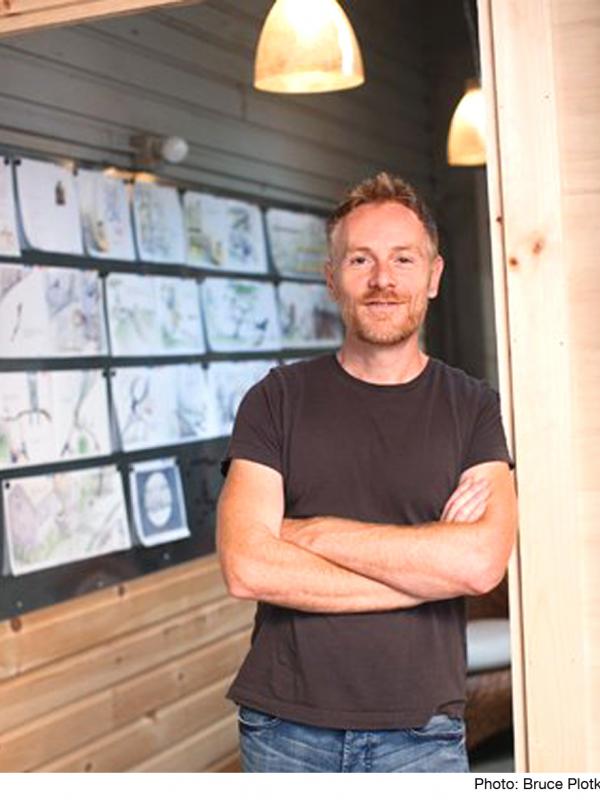 Matt Davies of the Journal News of Westchester County, N.Y. is the winner of the first Herblock Prize for editorial cartooning.

Davies was born in London, England, and moved with his family to the U.S. in 1983 when he was 17. He attended both the Savannah College of Art & Design and the School of Visual Arts in New York City. Before joining the Journal News in 1993, Davies did freelance cartooning and illustrations for varied publications ranging from the Village Voice and International Business magazine to the Manhattan Comic News. In addition to the Journal News, Davies is currently syndicated in 20 newspapers. 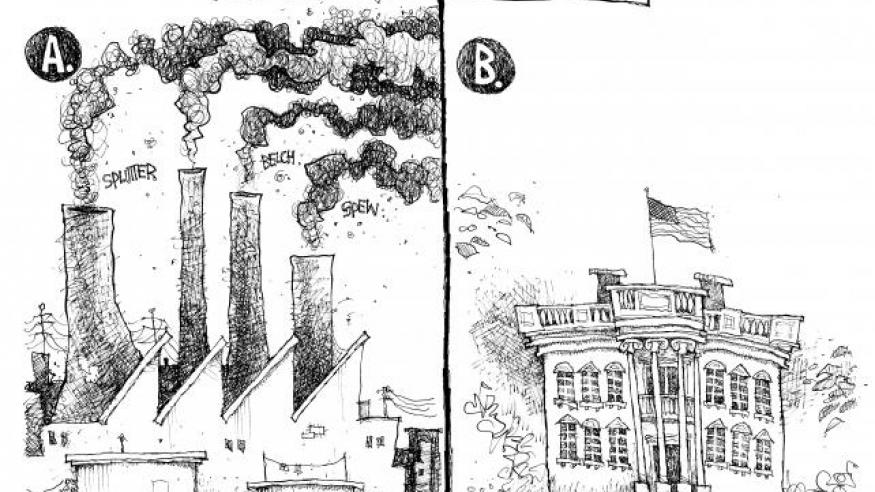 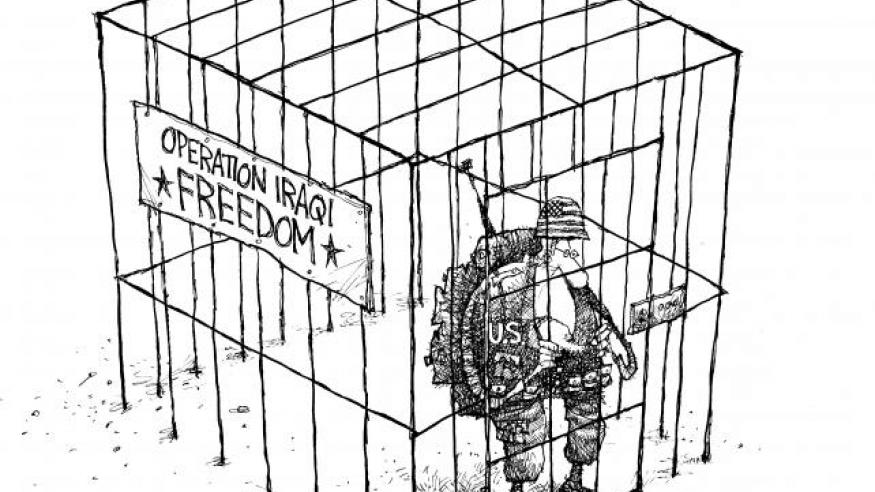 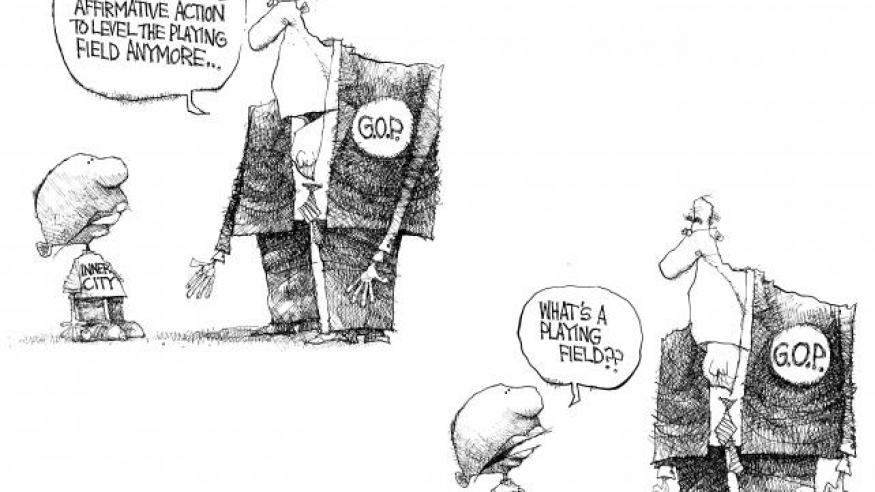 I was very excited when Frank Swoboda called me back in February to tell me that I was to be awarded the inaugural Herblock Prize. In the ensuing conversation he confessed that he had been concerned as to the precedent that a first winner would set for the prize and its reputation. So the precedent that I will now dutifully set, is that all winners must be really bad public speakers.

This is an incredible honor to be standing up here right now. I think this is a very important time to be a political cartoonist. It makes me very nervous that what used to air on vindictive right-wing call-in radio programs during the Clinton years, now passes for administration policy, and I feel privileged to be in a position to comment about it on some of the nation's newspaper editorial pages. I might catch a little flack for it, but I know that, one day, I will look back at this time in history, and be gratified to see that I didn't spend a whole lot of time doing cartoons about Martha Stewart. Which, of course, makes my receiving a prize named for Herblock - who is credited with coining the term, McCarthyism - especially meaningful to me.

First, thanks Mum and Dad for graciously not kicking me out of your basement when, as a freshly minted college dropout, I told you that I was going to "become an editorial cartoonist" They're here tonight. Just look for the couple who have the look of total disbelief etched upon their faces.

I'd like to thank my ever -patient wife, Lucy, who was able to overlook the fact she was dating a college dropout who had decided to "become an editorial cartoonist". If it wasn't for Lucy, It's safe to say, I simply would not be standing up here right now. When I draw my cartoons, I draw them for her.

"Dear Mr. Sherlock In our last telephone conversation you stated "I hired Matt Davies to be provocative" Davies is fanatically insensitive, insulting, intolerant, libelous, offensive and seditious, but not provocative. He viciously impugns the reputation of others through vile bias-attacks from which he arrogantly expects no response or serious consequences. Mr. Sherlock, You should immediately fire Matt Davies since he is no longer in any sense legitimately provocative and is only severely damaging your personal reputation and destroying the credibility of your newspaper."

I hired Matt Davies to be provocative." What sweet music.

On that note, there's plenty of empirical data to indicate that editorial cartoonists are a real pain in the arse. As a result most newspaper publishers don't think enough of their readers to keep us on staff these days. For a couple bucks, you can just buy a bunch of stuff from a syndicate, then pick & choose the material so as to avert controversy. Imagine wasting the time trying to find a cartoon that doesn't offend SOMEBODY.

11 years ago -When Gary Sherlock did the unthinkable and actually created a position for a staff editorial cartoonist at his newspaper - there were around 175 staff cartooning positions in the U.S. Unfortunately, his vision stands in stark contrast to what many other publishers had up their collective sleeves. Now there's about 80 staff editorial cartooning jobs left.

There are even some major newspapers, - with long traditions of having staff cartoonists - who currently have those positions conspicuously unfilled. It makes me shudder to imagine what the world would be like had the publisher of The Washington Post seen an opportunity to save a few bucks, avoid a bit of controversy, and not hire a young Mr. Block.

And speaking of whom, I'd like to thank Herblock himself,. His contribution to American editorial cartooning, and journalism as a whole, is impossible to overestimate. And thankfully that contribution will continue in perpetuity, thanks to the incredible foundation he so generously bequeathed to the world. My path did cross with his on several occasions, though I actually only met Herb once. We were both at an Association of American editorial cartoonists convention ten or so years ago, and when I saw him briefly standing alone, I approached this industry giant with all the trepidation of a young boy meeting the Lone Ranger in person, and said something very clever and rehearsed like "hey man, I really like your stuff". Maybe it was my ponytail, or the fact he had no idea who I was, or perhaps he could sense that I had only recently moved out of my parent's basement, but he looked a tad unsure when he said, "um, thanks."

I was excited at the prospect of meeting him again, back in the spring of 2001, when I was given the Robert F. Kennedy award for editorial cartooning, and he was given an RFK lifetime achievement award the same year. I looked forward to the opportunity to maybe redeem myself in his eyes. But they announced he was not well enough to attend the ceremony. His seat was empty, and he died later that year. I indulged myself a little when I found out I'd won this first ever Herblock prize - by hoping that, just maybe, it was Herb's way of saying: " I like your stuff too -'Man'.