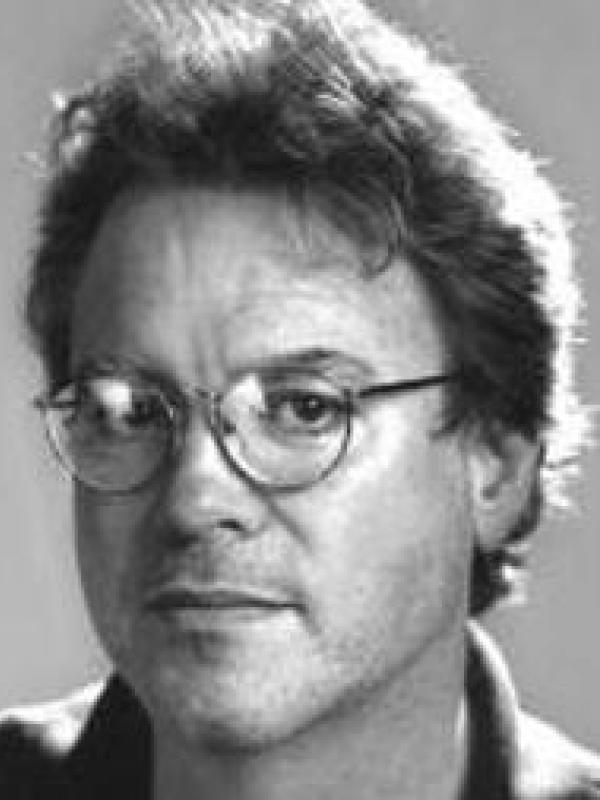 "Political cartoons, unlike sundials, do not show the brightest hours," Herblock once wrote. "They often show the darkest ones in the hope of helping us move to brighter times."

It is in that spirit that this year's judges awarded the 2007 Herblock Prize to Morin whose own interest in editorial cartooning began in earnest with the Watergate scandals.

Morin said Herblock was an inspiration for him when he was in college at Syracuse University in the 1970s. "One day my mom said 'why don't you do what Herblock's doing.'" he said. After two brief stints as a cartoonist in Beaumont, Texas and Richmond, Virginia, Morin was hired by the Miami Herald in 1978 where he has been ever since.

In 1996, Morin won the Pulitzer Prize for editorial cartooning and shared the prize in 1983 with other members of the Miami Herald editorial board. He has also won the Thomas Nast Award, the John Fischetti Award and the Berryman Award for his work. 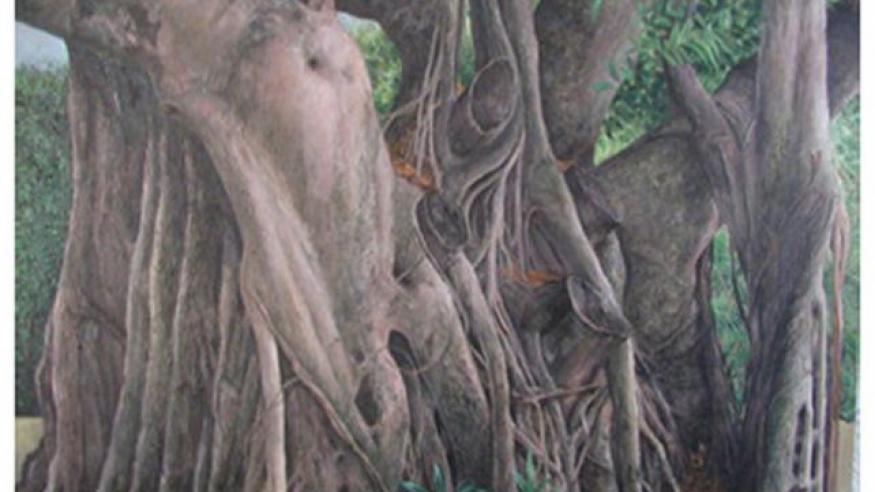 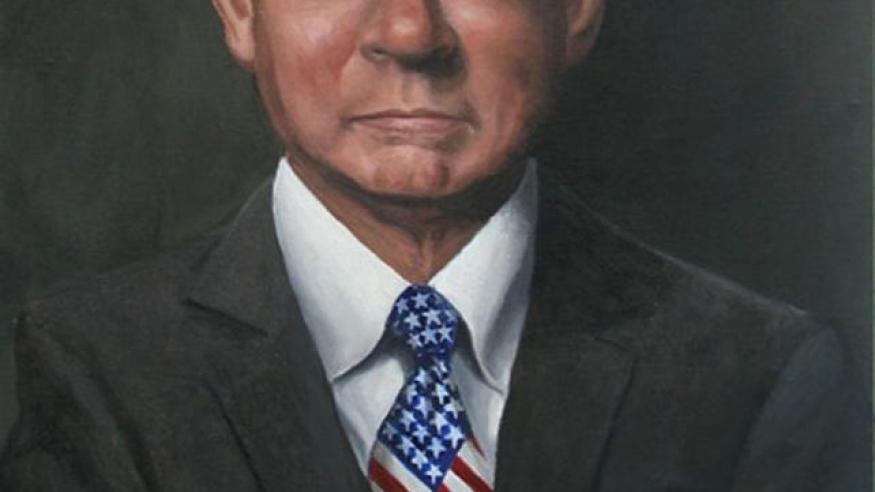 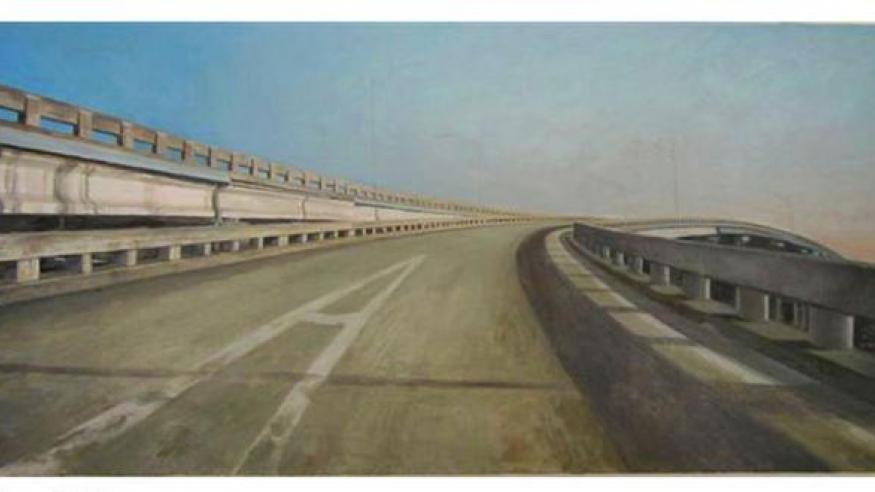 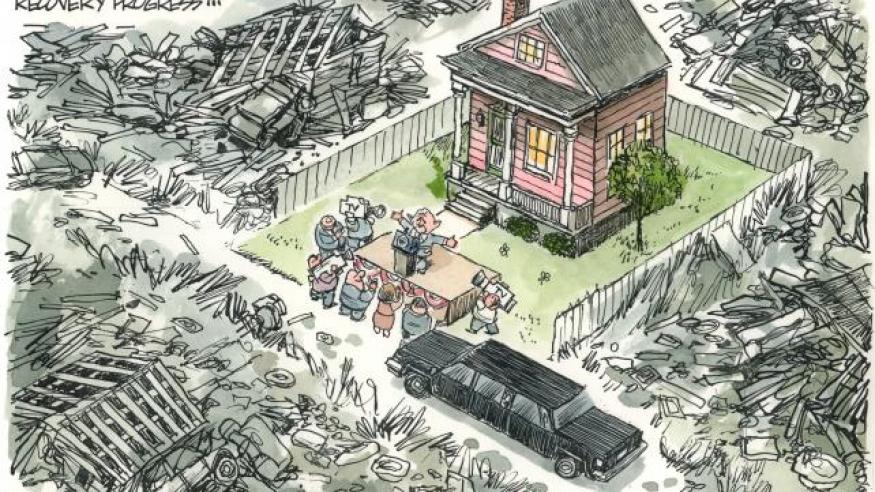 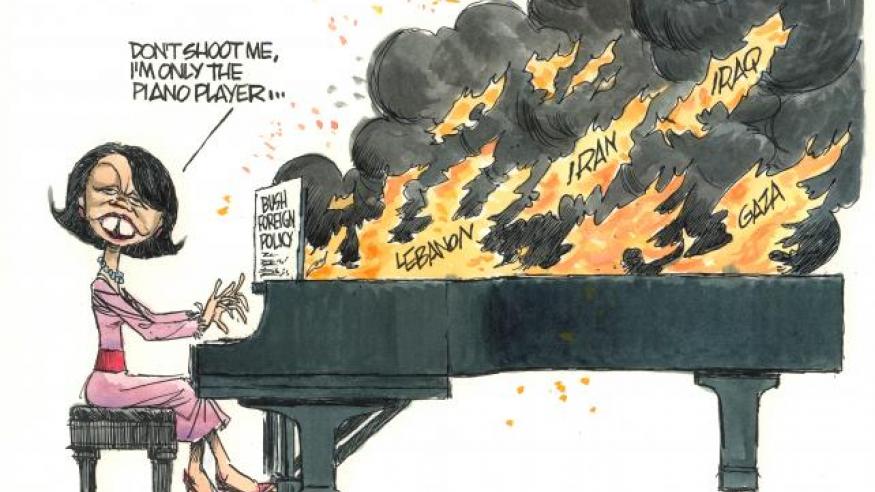 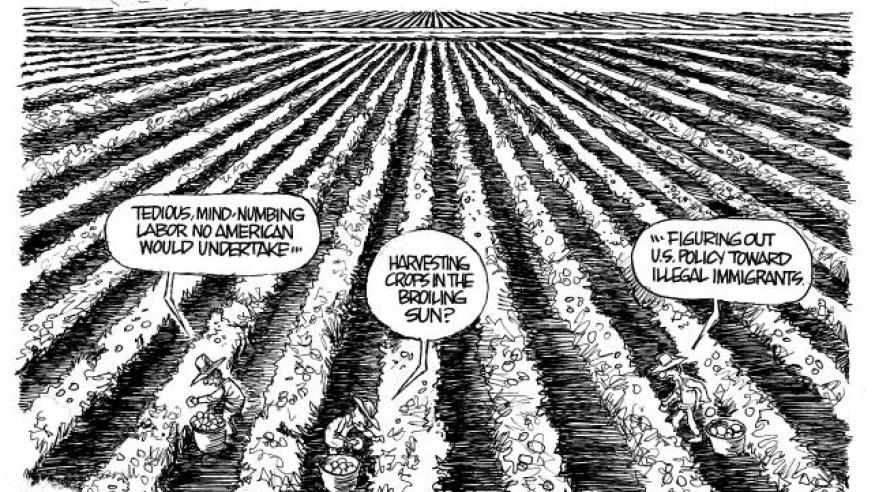 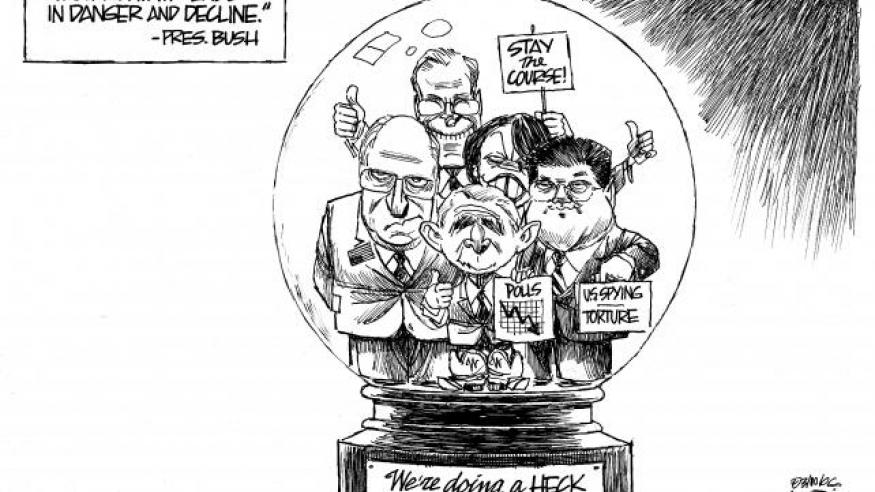 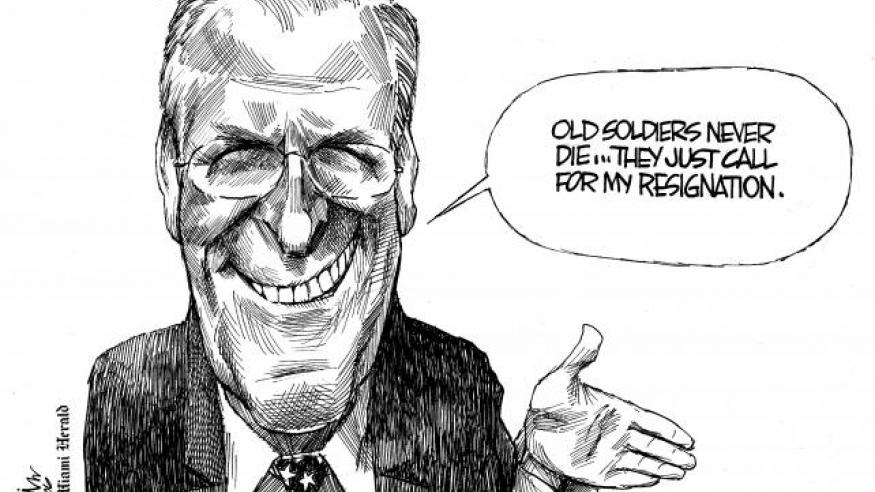 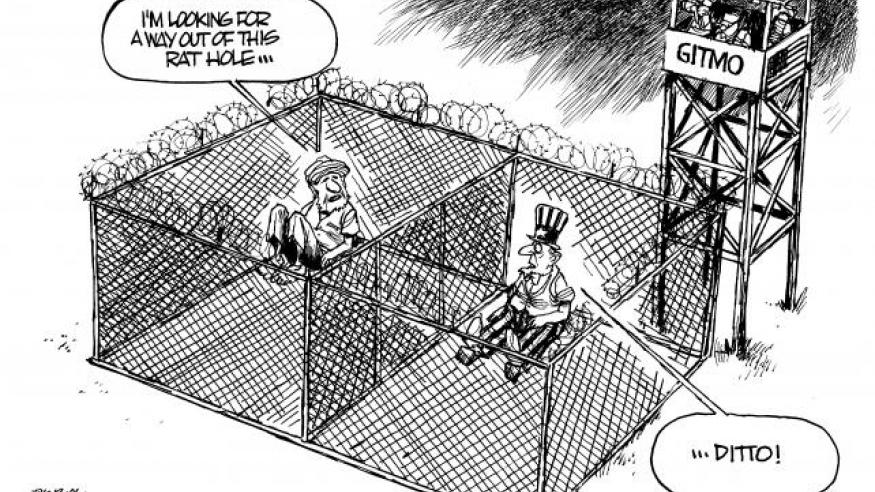 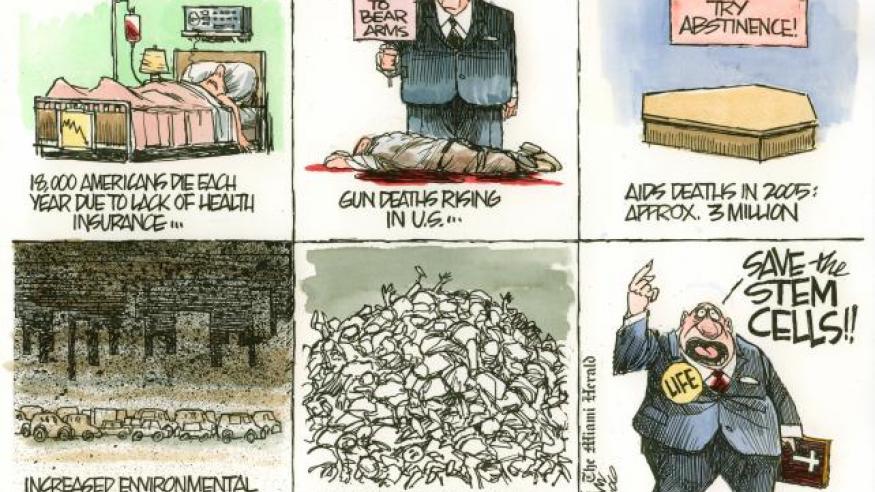 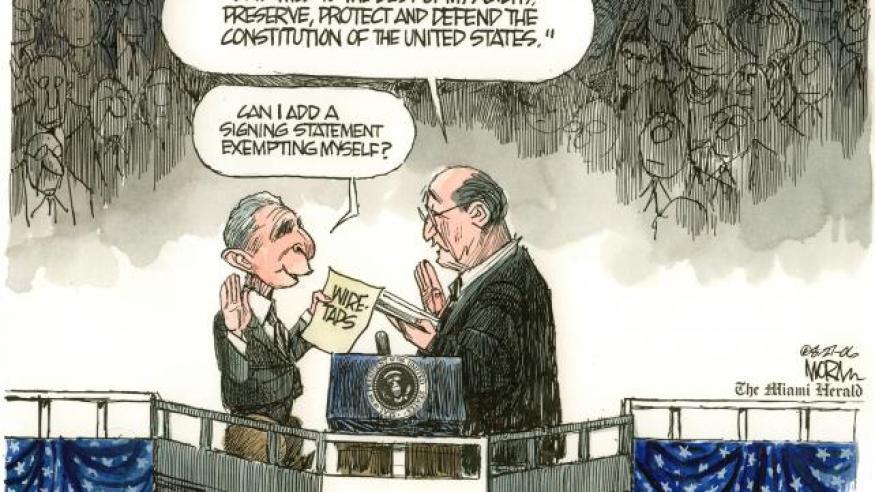 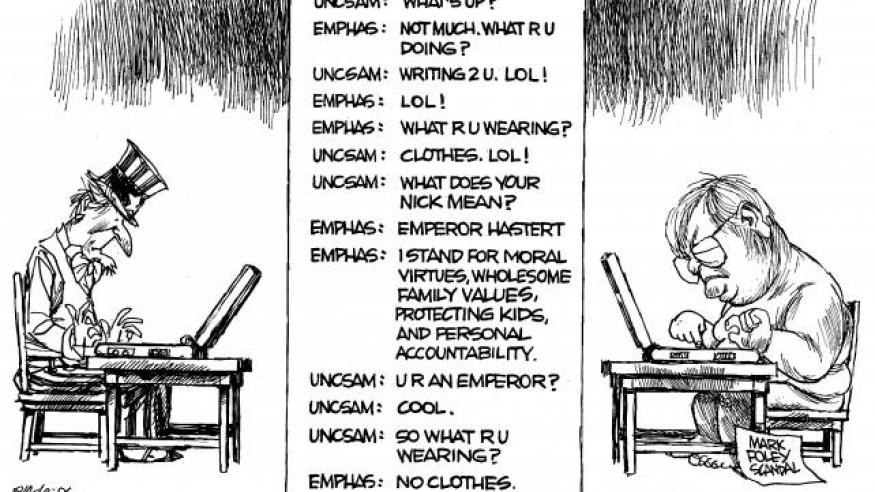 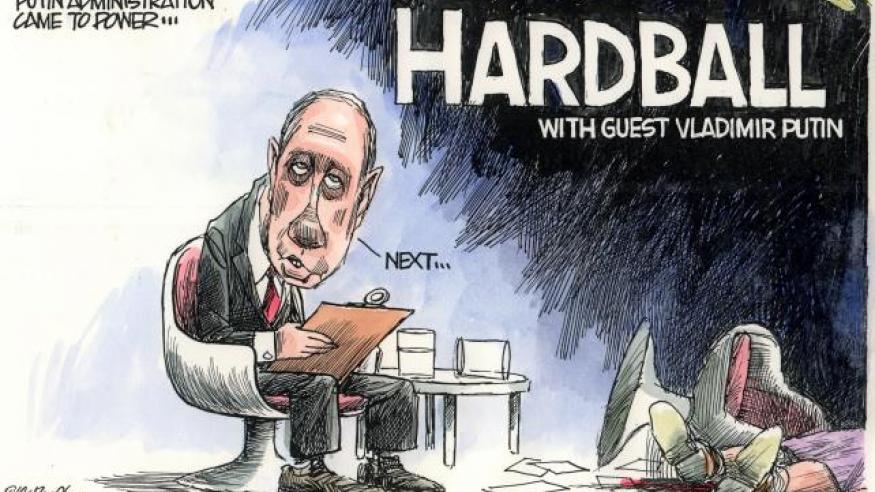 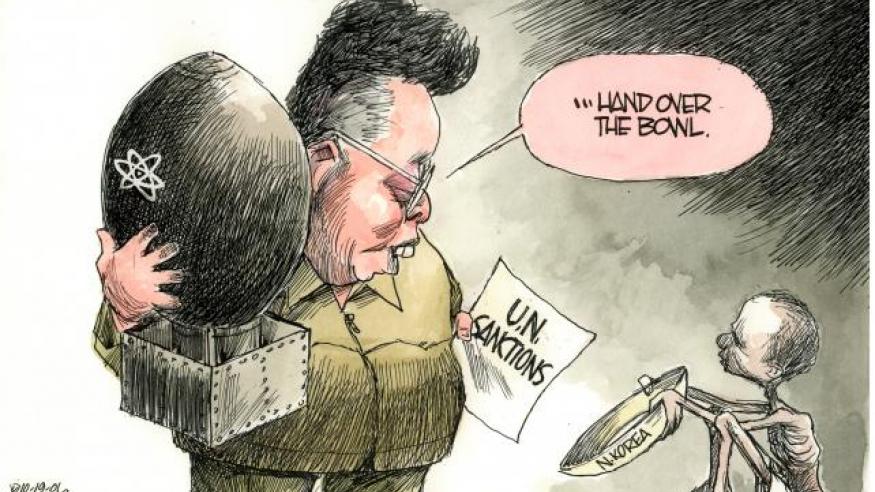 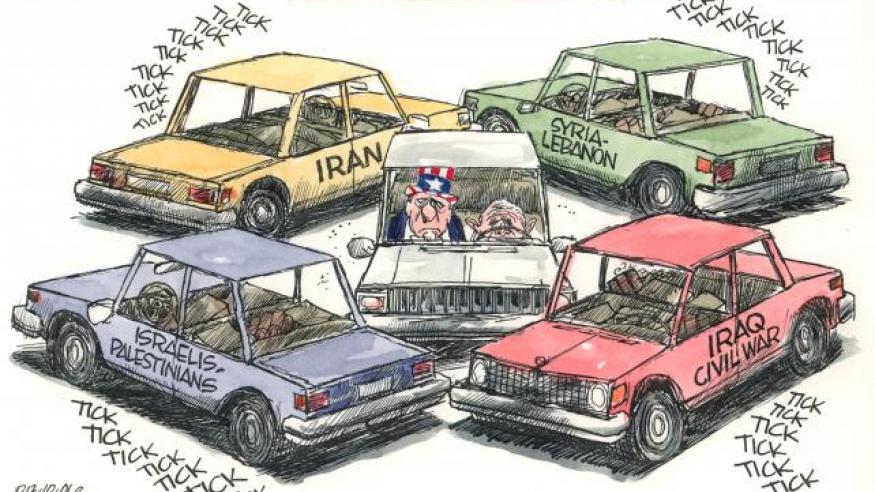 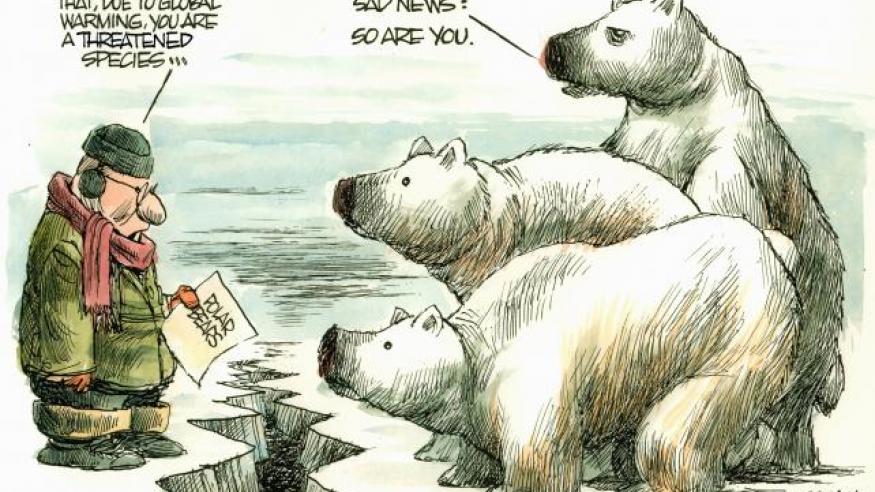 When Frank informed me that I was to be the recipient of this award, I told him it was the single honor that meant most to me. This had nothing to do with the monetary gift (although with two kids in college it will come in very handy), or the splendid gathering tonight. Herblock taught me more about what goes into making a good political cartoon than any other cartoonist, that concoction of elements that makes this such a treasured art form, totally unique to the profession of journalism.

Seeing his work every day struck me like the sound of a pile driver - wham! Wham! Wham! - Steady and relentless daily broadsides against liars, thieves, demagogues, egomaniacs, and thugs in public office. His work was not often funny and he didn't care. He cared only about getting his point across clearly and concisely, even if he had to utilize 100 labels to do it. Herb's unflagging passion for humanity, justice and truth was and still should be an inspiration to anyone thinking of seriously pursuing this art form.

One aspect of Herblock’s work that isn't often discussed is his drawing. The editorial cartoon is comprised of two essential parts: a well thought-out opinion and a powerfully rendered drawing to communicate that opinion. Herb's drawings were beautifully composed; he could have the capitol dome in the upper left hand corner, 5 or 6 figures, each with a suitable descriptive label, scurrying across the panel carrying sackfuls of ill-gotten booty, and john and Jane q. Public watching the proceedings and making an acerbic observation on the bottom. Despite the complexity of the image, he made those drawings easy and quick to read and a pleasure to look at. That is testament to his skill as a draftsman.

In addition, he was as great caricaturist. The test of a great caricature is when the drawing of the person looks more like the person than the person him or herself. As British cartoonist and stellar caricaturist Trog once said, "If you feel them looking back at you, you know you're alright." Herb’s caricatures consistently met that test. His renderings of Joe McCarthy and tricky dick Nixon looked back at you and they gave you chills. He stripped the veneer off those public figures, laying bare their deceit and vanity for all to see.

In 1977, Herblock was given the fourth estate award by the national press club. At the time I was the editorial cartoonist for the Richmond t-d, less than a full year into my professional career. The cream of the political cartooning crop was invited to do a drawing for and about Herblock, all to be displayed at the dinner. Somehow, I, too, was invited to participate. I was, to put

It mildly, totally, completely, absolutely petrified. It did my confidence no good when one of my cartooning superstar heroes greeted me by saying, “what are you doing here?" At the end of the reception line, herb

Greeted guests one by one and I was literally shaking by this time. When I was finally introduced, herb's face lit up; he extended his hand, and praised my drawing - which was embarrassingly amateurish as I look back on it - enthusiastically citing various aspects of it. He put me immediately at ease.

To herb, I wasn't a novice, out of my league in front of an authentic cartooning legend. I was simply a fellow cartoonist practicing the same craft, facing the same daily dilemmas of drawing a political cartoon. It hit me that Herblock not only drew cartoons sticking up for the little guy, he was that little guy and had he not realized that fact, he would not have been able to draw those great cartoons. Learning that simple lesson early in my career, a lesson herb taught by example, was an invaluable gift.

That is what makes this evening's celebration of this great, and humble, artist's work and its enduring inspiration to all who practice this craft so special.

On a personal note: when frank originally interviewed me for the foundation's press release, I told him the true story of how my mother suggested I consider drawing professionally by saying, "why don't you do what Herblock does? That would be a great way to make a living." She is seriously ill in hospital at the moment, so for me this award is dedicated to her as well as my father who is also recovering from a serious illness. Both of them unfailingly encouraged and supported my pursuit of an artistic career. This by itself is unusual for a parent since this business is turbulent and unpredictable. What makes their encouragement especially amazing to me is that both of them are life-long, loyal republicans.

Despite this fact, they read my work every day and rarely call to complain of its content. Like Herblock, they taught me a lesson by example: having tolerance and respect for points of view I don't agree with, a lesson especially valuable in these divisive, polarized times.

Thank you all very much.