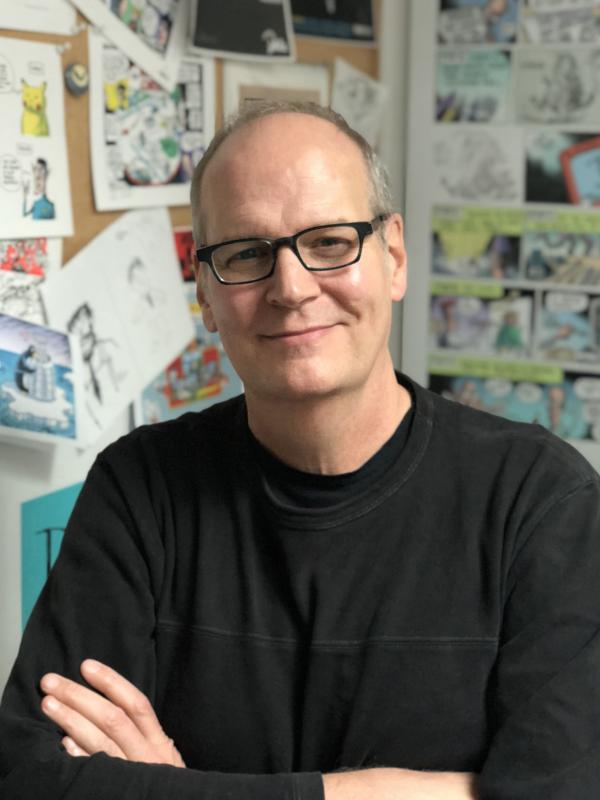 Contributing cartoonist to Tinyview.com and Counterpoint

Note: The Herblock Prize & Lecture Ceremony for 2020 and 2021 is tentatively scheduled for October 2021 but will depend on the specifications of the Library of Congress at that time.

Syndicated by Andrews McMeel Syndication, Rogers’ work has appeared in The New York Times, The Washington Post, USA Today, Time, Newsweek and The Week, among others.

Rogers’ work received the 1995 and 2019 National Headliner Award , as well as the 2000 and 2013 Thomas Nast Award from the Overseas Press Club. In 2015, Rogers was awarded the Berryman Award from the National Press Foundation. Rogers received the Sigma Delta Chi Award for editorial cartooning in 2019. In 1999 and 2019, he was a finalist for the Pulitzer Prize. Rogers was named a 2019 Emerson Fellow by the Emerson Collective and was the recipient of the Association of American Editorial Cartoonists' 2020 Rex Babin Memorial Award for Excellence in Cartooning.

Rogers served as president of the ToonSeum, a museum of comic and cartoon art in Pittsburgh, from 2007 to 2017.

In June of 2018, after 25 years on staff at the Pittsburgh Post-Gazette, Rogers was fired for drawing cartoons critical of President Trump. In his most recent book,Enemy of the People: A Cartoonist’s Journey, Rogers talks about the importance of satire in today’s political climate. Rogers currently draws freelance cartoons for Counterpoint.com and Tinyview.com and his work continues to be distributed by Andrews McMeel Syndication. 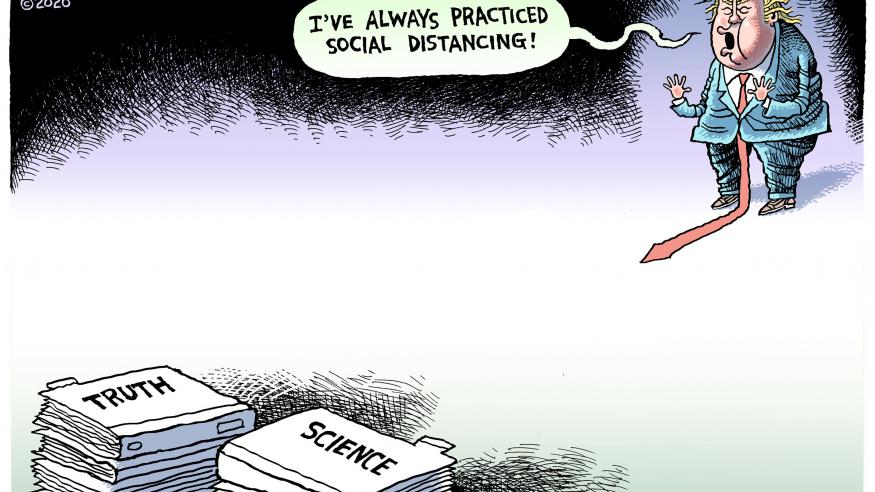 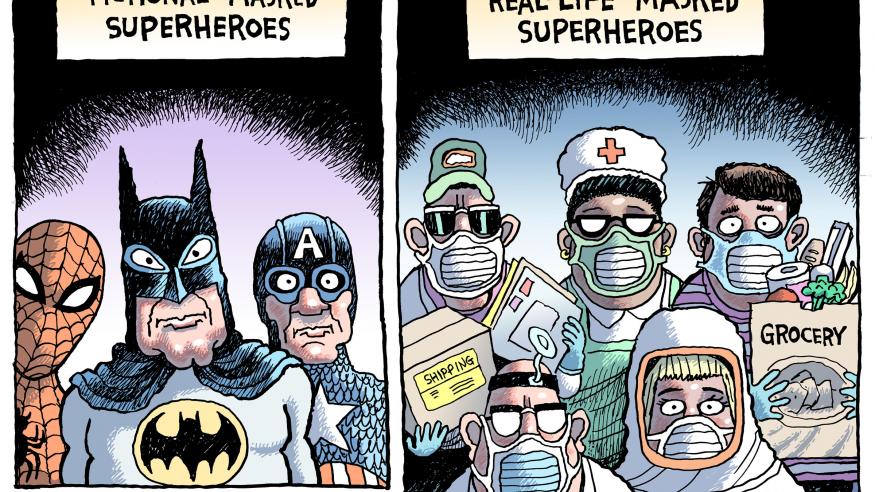 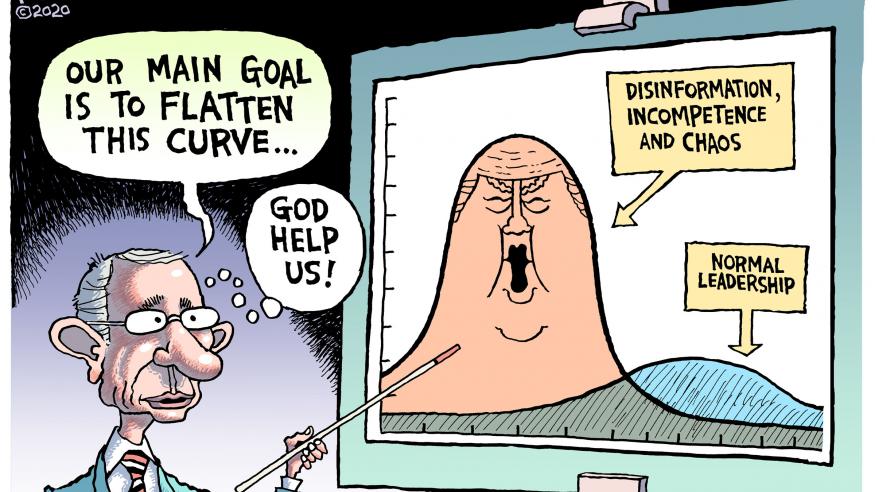 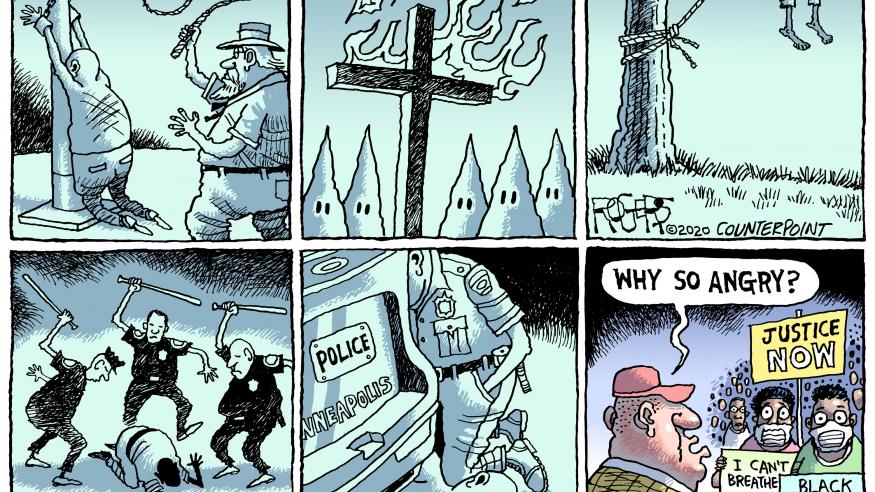 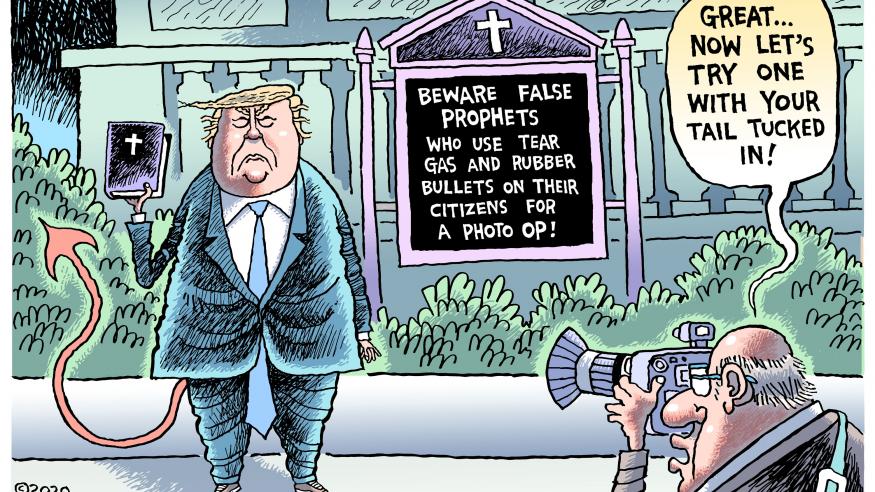 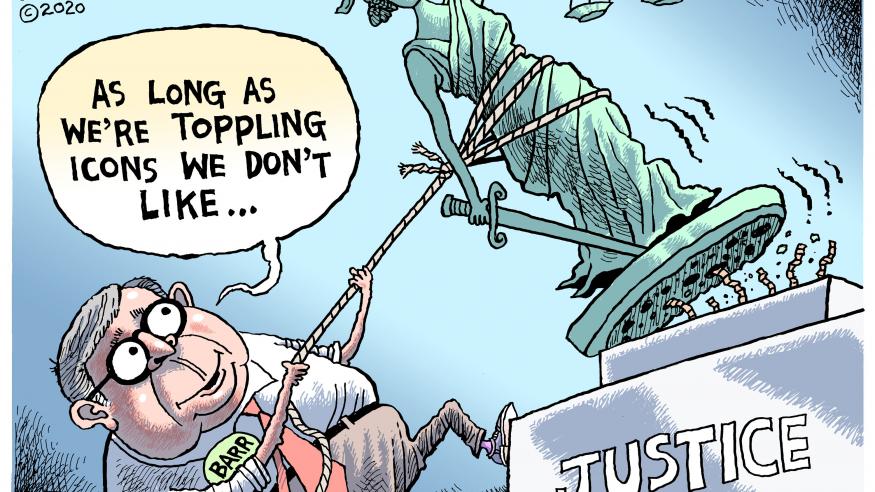 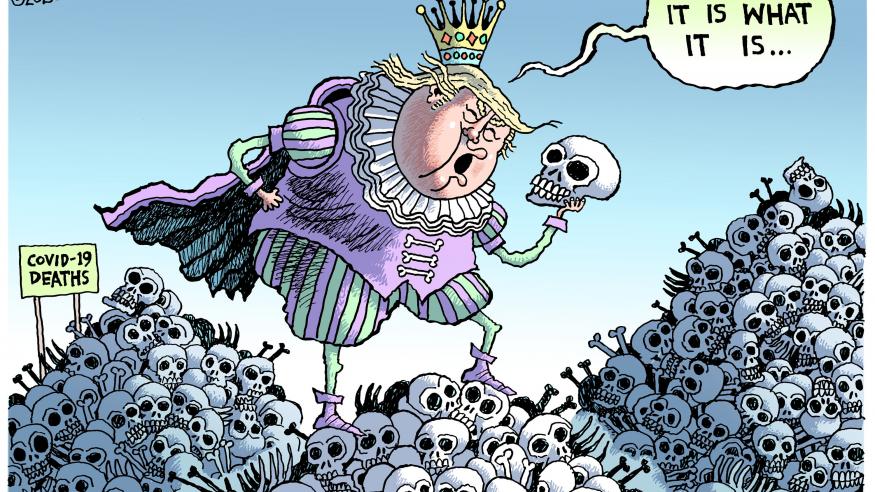 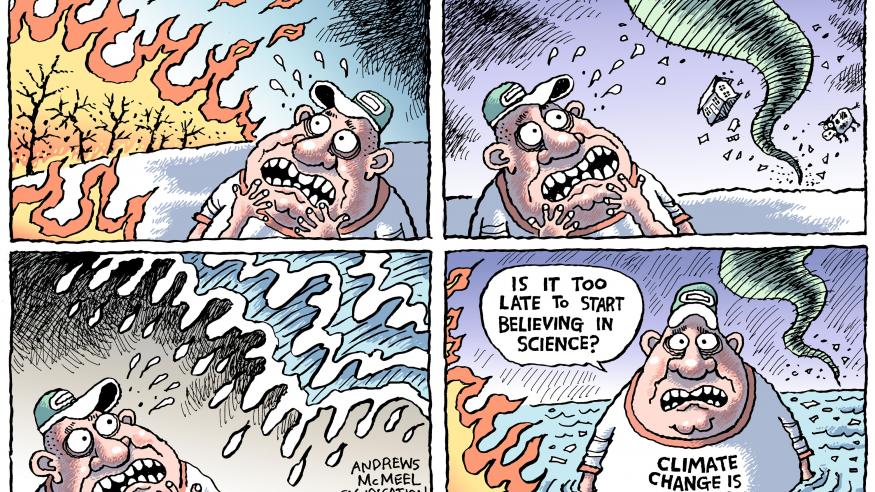 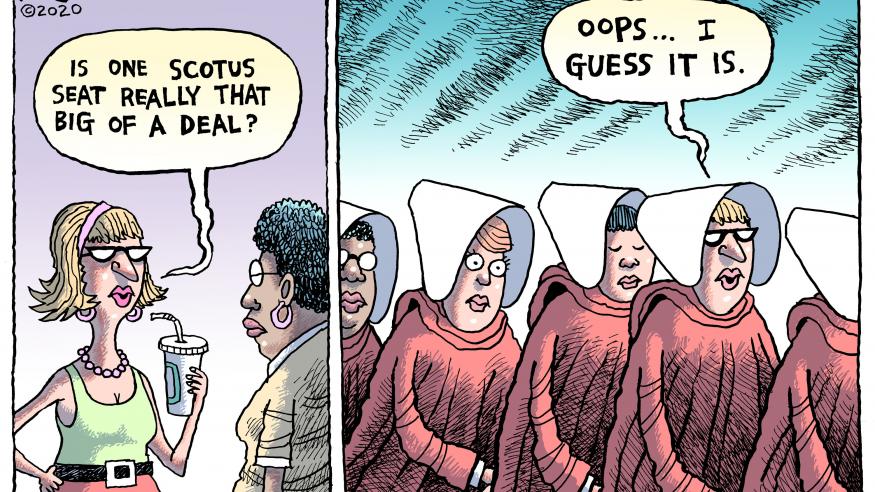 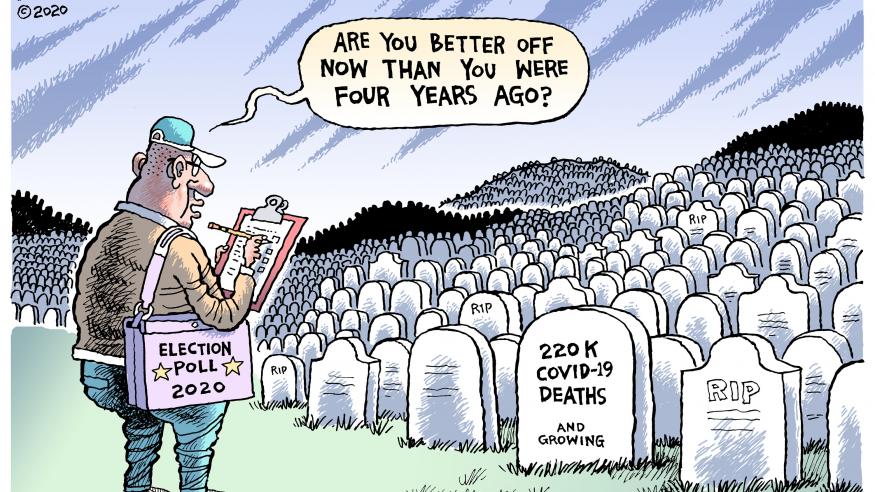 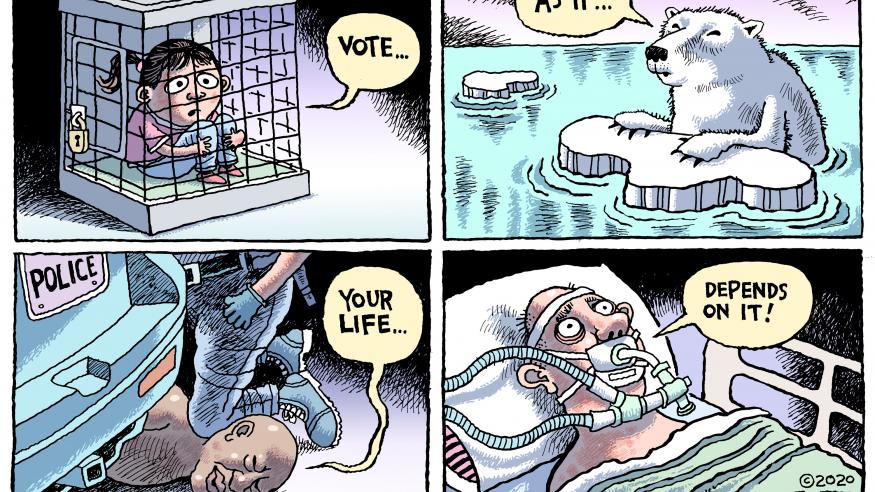 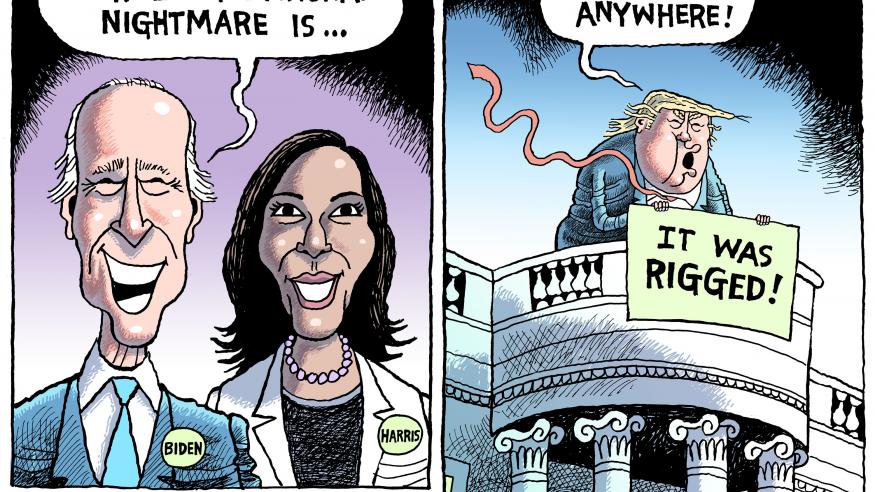 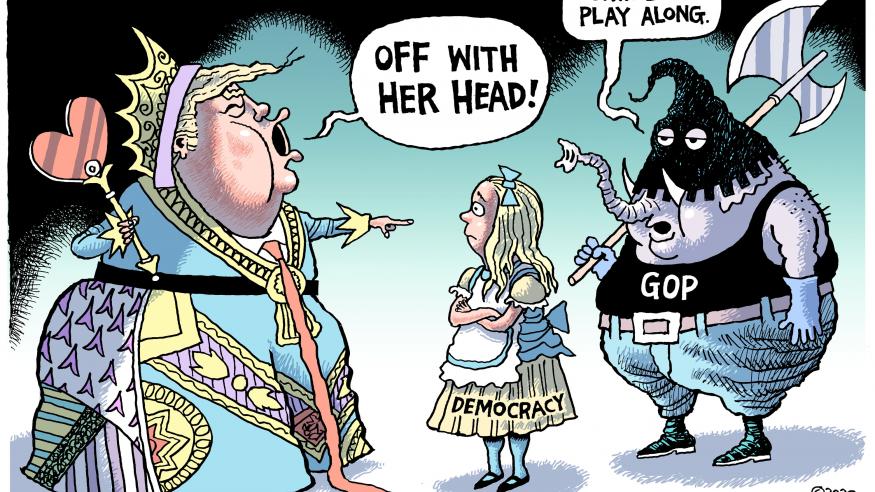 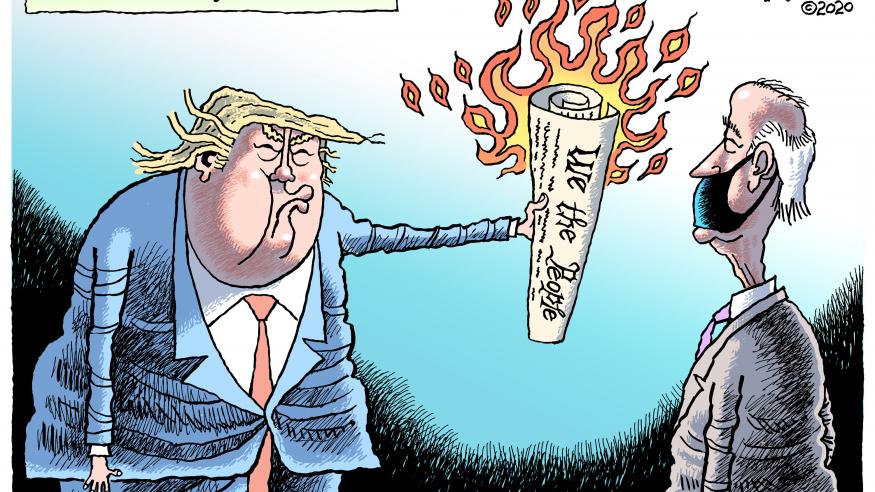 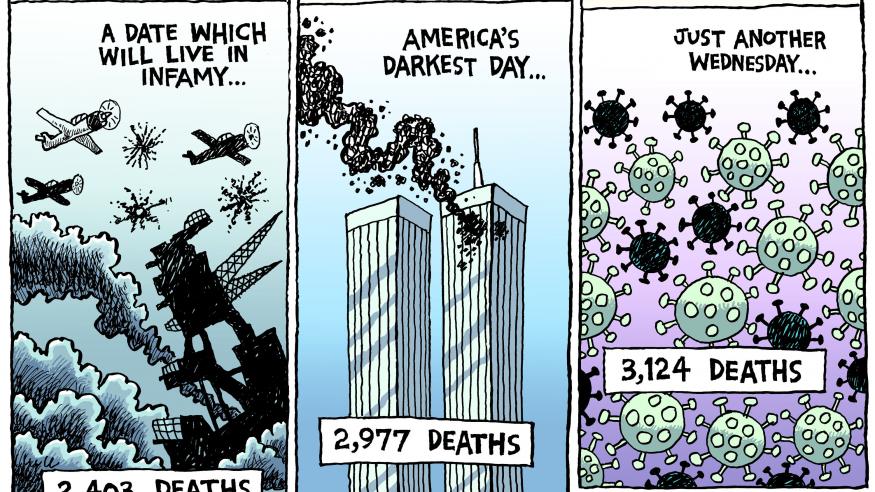 Thank you, Sarah Alex, Marci Brane and the Herb Block Foundation. And thank you to the Library of Congress for hosting us. I can’t tell you all how thrilled I am to win this award.

To me, this is the most prestigious award I could win. It’s like the Oscar for editorial cartooning. (OSCAR1) Naturally, our statue would more exaggerated looking (OSCAR2). With that in mind, I hope you will indulge me as I thank all of my agents, producers, fellow actors, dieticians, trainers, psychics, dialect coaches, oh, and of course, my tattoo guy.

Ok, I’m joking. But not about the tattoo guy. I have a really good one. He’s the same guy who did Roger Stone’s Nixon tattoo. Roger got a tattoo of his favorite president (TATTOO1). I got a tattoo of the cartoonist who helped take that president down! (TATTOO2) Pretty cool, huh?

Despite the image most people have of the tortured, lone cartoonist sitting at his drafting table, there are actually a lot of people to thank.

And to my late father, my biggest champion and supporter. Thank you for embarrassing your 10-year-old son by pulling out his private cartoon notebook every time someone stopped by the house. You prepared me for the blank stares I later got from editors and publishers.

Thanks to all of my former colleagues at the paper (with the exception of one or two), I miss you guys a lot. A special shoutout to my long-time editor, Tom Waseleski, for his wisdom and guidance and for possessing that all-important attribute that most managers do not have: a sense of humor.

I’d also like to thank all of the readers who have stuck with me over the last few years. Here is a photo of them (CROWD1). Wait. No. That’s Trump’s inauguration. Here’s a shot of MY supporters (CROWD2). I’d like to extend an extra special thanks to my patrons on Patreon. (BLANK)

Most importantly, I’d like to thank my beautiful wife Sylvia, whose kindness, wit, intelligence and passion for social justice inspire me every day. She is my best friend and best editor. I wouldn’t be here without her.

And, of course, I would be remiss if I didn’t thank the great Herblock himself, an American Institution and an inspiration for all editorial cartoonists.

I am not exaggerating when I say Herblock was and is one of my heroes.

Granted, Herb had already won two Pulitzer Prizes before I was born and he had been a professional cartoonist for 50 years before I tried my hand at political cartooning in college. As for style, I was more drawn to the landscape format of more contemporary editorial cartoonists. Still, I was impressed by his humor and dedication to social justice issues. Not to mention his amazing cartoons about Nixon and Watergate.

I may not have picked up his grease pencil and stipple board, but in college I briefly considered combining my first and last names in my signature like Herb did. Problem was, (SIGNATURE) Robgers didn’t really roll off the tongue, so I gave up that dream.

I remember meeting Herb for the first time in the late eighties at his office at the Washington Post. First, I was humbled that he agreed to see this young unknown cartoonist at all, let alone in the middle of his busy workday. I was taken aback by his warm and welcoming presence. It belied his take-no-prisoners cartoons. But I was encouraged to see that his office looked a lot like mine (HERBLOCK OFFICE). It was a wreck. Stacks of newspapers and cartoons scattered all over. Barely room to walk. A half-eaten sandwich on his drafting table. I thought, well, I’ve got the messy office down, maybe there’s hope for me yet.

The other thing that impressed me was Herb’s creative process. After working all morning reading and coming up with several ideas, he walked out into the newsroom with a handful of sketches to show to a few trusted colleagues. Despite the fact that he was a living legend, he was not afraid to invite a critique of his work and he knew that different perspectives made his work better. He was part of a team. His humility in that moment was inspiring.

It is especially meaningful to me to be receiving this award for the cartoons I drew in 2020. What a crazy year. We should all get an award for making it through that year.

In a strange way, 2020 felt like a real Herblock year. It’s almost as if some unseen force took the events Herb witnessed during his 70-year career and compressed them all into 2020.

Herb was 9 years-old during the 1918 pandemic (NEWSPAPER), While researching clippings about the 1918 Flu I came across this Seattle newspaper that had not one, but two cartoons on the front page. Remember when they used to run editorial cartoons on the front page? Neither do I, but I miss those days. As I said, Herb was 9 during the 1918 pandemic, and 2020 brought us another global pandemic (TRUMP VIRUS).

As you can see, it was an amazing year to be a political cartoonist. (BLANK) I saw it in the stellar work produced by my fellow cartoonists and I am thankful and humbled to be recognized among them.

But there’s a more personal reason that this award is so meaningful. I won it as a freelance cartoonist. As some of you might know, in 2018, after 25 years as the staff cartoonist for the Pittsburgh Post-Gazette, I was fired for drawing cartoons critical of President Trump. Like this one about separating children from their families at the border. (IMMIGRANT SIGN) In other words, I was fired for doing my job.

I’ll be honest, losing my job was devastating (BLANK). Finding myself suddenly without a salary or health insurance was big, but that wasn’t the worst part. I was terrified that I wouldn’t be able to function without a newspaper behind me. I had spent three decades as a staff cartoonist for a major daily newspaper. My professional identity was inextricably tied to that position. This was the only job I’d ever known.

It was especially hurtful to be pushed out because the editorial pages had provided me with my connection to the community. Readers would write, email and call to tell me how I was doing. Yes, much of the correspondence was negative but that just meant I was hitting a nerve. And there were always other readers quick to defend me and my work. This kind of back and forth fueled me. I was worried that if readers didn’t have a physical newspaper to pick up, if they couldn’t open to an editorial page, they wouldn’t see my work. They wouldn’t laugh or get angry. I would lose that connection.

But the readers proved me wrong. From Counterpoint and Tinyview to GoComics and Patreon, the readers have shown up and I still have that community. They’ve helped me survive these tumultuous times, and I hope, in some small way, my cartoons have helped them get through them too.

I am profoundly grateful to be standing here three years after being fired to receive the 2021 Herblock Prize.

But my story isn’t unique. In the 20 years since Herblock left us, newspapers and the cartoonists they once employed have become endangered species. Staff cartoonists have become the exception rather than the rule. But we can’t let that get us down. I’m sure if Herb were here today he would be the first to say we must continue to draw no matter what.

That’s why organizations like the Herblock Foundation are so important. They celebrate editorial cartooning, not just of the past, but also the cartooning of the present and future. This is especially crucial when other prominent journalism organizations choose to ignore the great work that is being done in our field. Herblock’s legacy and his Foundation help keep freelance cartoonists like me at the drawing table committed to keeping satire alive.

Let’s face it, we are living in an age where democracy, the free press and the Constitution are all under attack. We need editorial cartoons now more than ever.

Cartoons remind us that high crimes and misdemeanors should come with consequences (NIXON), they remind us that social media is not a replacement for real journalism (NEWS HOLE), and that we can’t keep killing each other with guns (AMERICAN AS).

Finally, cartoons remind us of basic truths, like the fact that science is not a hoax and climate change is real. I leave you with a time-lapse drawing video of one of the cartoons included in my Herblock Prize entry. You may recognize the music, it’s Wagner’s Ride of the Valkiries. I chose this in honor of Elmer Fudd’s operatic pursuit of Bugs Bunny while singing “Kill the Wabbit”.